A View of Henry Giles 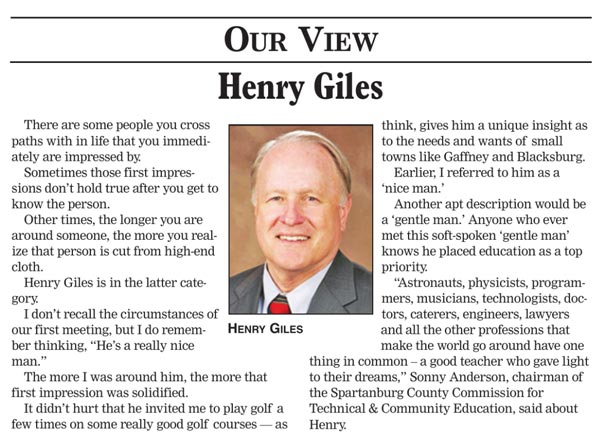 There are some people you cross paths with in life that you immediately are impressed by.

Sometimes those first impressions don’t hold true after you get to know the person.

Other times, the longer you are around someone, the more you realize that person is cut from high-end cloth.

Henry Giles is in the latter category.

I don’t recall the circumstances of our first meeting, but I do remember thinking, “He’s a really nice man.”

The more I was around him, the more that first impression was solidified.

It didn’t hurt that he invited me to play golf a few times on some really good golf courses — as his guest!

Henry will soon retire after more than 50 years with Spartanburg Community College, the past eight as president of that fine institution.

Under his leadership SCC has flourished and contributed greatly to the prosperity of Spartanburg, Union and Cherokee counties.

Before being named the sixth president of SCC, Giles served as interim president as well as vice president and executive vice president of business affairs for 18 years. He was responsible for the financial management of the College during the majority of his SCC tenure.

Although the school is named ‘Spartanburg Community College,’ Henry was — and still is — a staunch advocate for Cherokee County. He has always supported initiatives to improve the quality of life in this county. Being from Cowpens, I think, gives him a unique insight as to the needs and wants of small towns like Gaffney and Blacksburg.

Earlier, I referred to him as a

Another apt description would be a ‘gentle man.’ Anyone who ever met this soft-spoken ‘gentle man’ knows he placed education as a top priority.

“Astronauts, physicists, programmers, musicians, technologists, doctors, caterers, engineers, lawyers and all the other professions that make the world go around have one thing in common – a good teacher who gave light to their dreams,” Sonny Anderson, chairman of the Spartanburg County Commission for Technical & Community Education, said about Henry.

I should add another adjective to describe Henry — humble. His own words make that perfectly clear.

During a ceremony last week in which he was honored and announcing the SCC Giles campus would be named for him, Henry said, “The reason the College has been able to do so many things that I am getting credit for today, is not because of me but because of the faculty and staff, the retirees. They are the ones who do this work that allows me to get this credit, they are the ones who have made a difference for this college.”

To that I say, a good leader is needed to make things happen.

Henry Giles was a good leader and a good friend to Cherokee County.