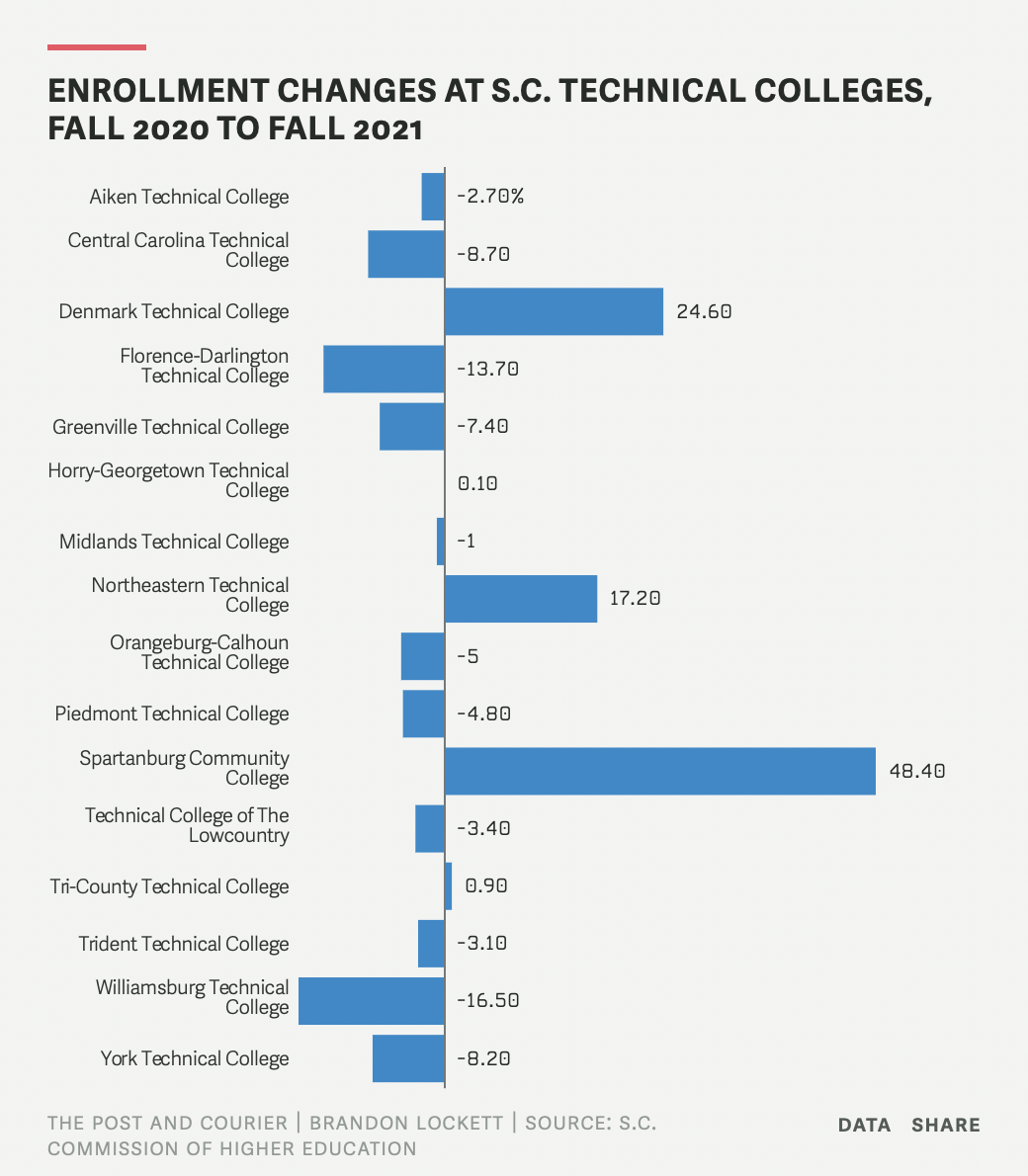 When the pandemic hit, Spartanburg Community College saw a dip in enrollment. Then the school’s numbers jumped more than SCC enrolled had prior to the pandemic and any time in the 2010s.
Article by: Maura Turcotte | Post and Courier

Enrollment in South Carolina’s two-year colleges plunged by nearly 20 percent from 2014 to 2019, more than almost any other state in the South.

Only West Virginia saw a bigger decline, though just barely. It had a 19.3 percent drop in enrollment in two-year colleges compared to South Carolina’s 19.2 percent, according to a recent report released by the Southern Regional Education Board, or SREB.

Falling enrollment at the state’s 16 technical colleges could cause major ripple effects across South Carolina. Fewer students means schools provide fewer classes and support less faculty. Schools not only offer affordable education opportunities for communities, but they also provide critical workforce training for some of the state’s biggest manufacturers, including BMW and Boeing.

“Folks have to give a critical look at what that really means for the workforce and the future of having enough folks with a college credential to fill the jobs and vacancies across the region and even nationally,” said Stevie Lawrence, SREB vice president for postsecondary education.

Nicole Hyman, spokesperson for Horry-Georgetown Technical College, pointed to the reach of the college’s training. From law enforcement, education and social work to health care and manufacturing, the school helps prepare so much of the community’s workforce, she said.

As a result of these schools’ impact on workers, industries and communities, South Carolina leaders have been pumping money into the technical college system in the last year.

Superintendent Molly Spearman announced in February that the Department of Education is investing $11.5 million of federal COVID relief funds into technical education over the next three years. Additionally, Gov. Henry McMaster released a plan in November to use $124 million in federal relief funds to send 15,000 people to technical colleges.

Whether these funds will push enrollment numbers up remains to be seen. While many of the state’s technical colleges are already seeing their declining numbers slow down, they’re still losing students.

But several schools do show some promise.

SREB’s leaders and South Carolina’s two-year colleges both attributed the decline in part to the healthy economy prior to the pandemic. When the economy is shaky, people often go back to school for career training. During the 2008 Great Recession, many did just that.

But in the years following, as the economy recovered and employment rates grew, fewer people felt the pull to enroll in two-year colleges.

Of course, two-year colleges have only taken more of a hit since waves of the coronavirus began surging in spring 2020. Community colleges across the country have lost over 827,000 students since the start of the pandemic, according to data from the National Student Clearinghouse Research Center.

Sickness, stress, tighter funds and more may have contributed to declining enrollment at schools. For instance, when Orangeburg-Calhoun Technical College turned to virtual classes, the school had difficulty reaching some students, said Williette Berry, executive vice president for academic affairs.

Not everyone had access to the internet in rural areas, nor were all students interested in remote learning. The school tried to expand its broadband reach so students could work outside in the parking lot. Many still withdrew from their studies.

In the last year, while South Carolina’s technical colleges continued to see decreases, they didn’t see as dramatic a drop as before, according to data from the South Carolina Commission on Higher Education. In fact, they only saw 400 fewer students in fall 2021 than they did in fall 2020.

Rosline Sumpter, vice president of academics, student service and research for the South Carolina Technical College System, said officials have been implementing an extensive number of programs to attract more students and ensure their colleges live up to their tagline — affordable, relevant and accessible.

“We want to make sure we’re preparing individuals for the workforce development of the state and really investing in that human resource development, which ultimately leads to quality of life,” Sumpter said.

Trident officials said they’re looking at how they can innovate and reach more students, from workforce training programs to more online lectures. They also have begun offering what they call “minimesters.” Rather than take courses over the typical 14 or 15 weeks, students have the chance with some subjects to take a class in potentially three, four or seven weeks.

Additionally, they’re trying to develop programs that are stackable, allowing students to earn certificates, take breaks in their schooling when needed and eventually build to an associate’s degree, said Melissa Stowasser, the college’s assistant vice president of community partnerships.

“We are in the process of becoming much more flexible and much more agile in meeting the needs of those populations of students who do need to work and who do need to be home with their children,” Stowasser added.

As a result of these changes, the school has seen its enrollment numbers improve this past spring and summer said Samantha Richards, Trident’s associate vice president for planning and accreditation. The increases aren’t huge, but they said they feel cautiously optimistic.

Community connections fuel growth at Spartanburg
When the pandemic hit, Spartanburg Community College saw a dip in enrollment. Then the school’s numbers jumped.

The college in the Upstate reported nearly 6,100 students last fall. That’s more students than Spartanburg enrolled had prior to the pandemic and any time in the 2010s.

Michael Mikota, president of Spartanburg Community College, sees focusing on access, affordability and return on investment as key to the school’s success.

“What we’re trying to do is change the notion of what it means to go to school, how we can be adaptable for individuals to continue on with their education, how we can support and provide services and how they can launch in different directions,” Mikota said.

He and other school leaders have worked to build connections across the Spartanburg community, from the chamber of commerce to the local legislative delegation, to advertise their offerings, develop partnerships for job training and get funding. While many of the other technical colleges have promised free tuition for certain programs through fall 2022, Spartanburg has extended the free tuition offer — available to students in any program at the school — for the entire 2022-23 school year.

He added higher education needs to be nimble to meet students’ needs. The school continues to grow its training programs and offer a number of classes online which helps students juggling work and studying. School officials have also developed more transfer agreements with four-year colleges.

As a result of these efforts, Mikota said an overwhelming majority of their increases in enrollment came from students ages 24 and older, which he attributed to the school’s ability to reengage students, including those who had dropped out because of the pandemic and those who had withdrawn even before that.

With rising inflation and more people questioning the value of colleges that leave students in debt, Mikota sees the training that happens at his school and the other technical colleges like it making a real difference for students and the economy alike.

As the school’s student numbers continue to grow, Mikota is looking to grow other parts of the college, with more faculty, career programs and student-support services. He’s eager to reach more people.