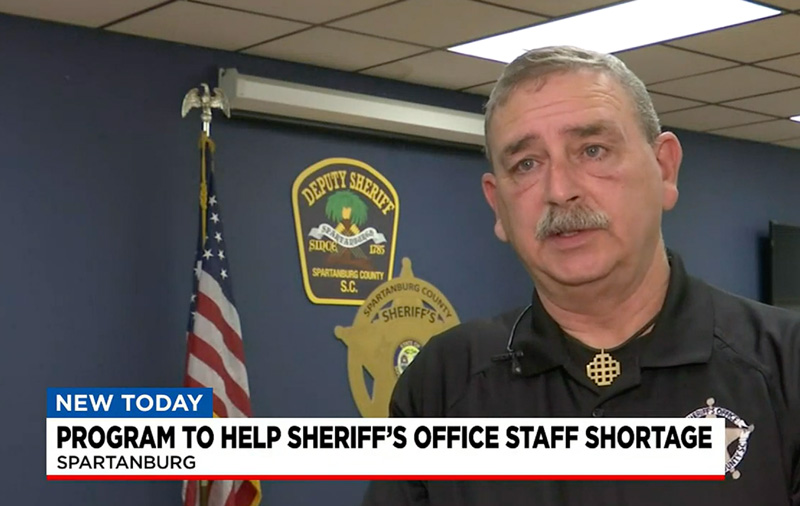 One Upstate school is offering a new, program to get students into law enforcement jobs quicker.

The hope is that it will help the county with staffing shortages. The Spartanburg County Sheriff Office is no exception, according to Chief Chuck Wright.

“We’re like 35 short at the detention center. And we’re 18 short here,” Wright said.

We asked Wright why he believes they’re struggling to find staff.

“A lot of that’s got to do with the retirement system,” Wright said, “They say you can only make a few dollars, basically, ten grand after you retire. Hopefully, they’re fixing to work on that.”

Spartanburg County says the sheriff’s office is the county’s largest department, taking up about one-third of their employees.

Spartanburg Community College Strategic Communications Director Colton Grace says their goal is to get the students to local agencies.

“Our hope is that we can help in partnership with recruitment and retention with local law enforcement agencies to bring in new applicants,” Grace said.

Then, students will apply to a law enforcement agency, get hired, and train for about eight more weeks in Columbia. Grace says this streamlines the process, not the work it takes to wear a badge.

“This actually increases the amount of time that applicants would have in front of qualified instructors,” Grace said, “And even more so would put them in a smaller classroom setting.”

Plus, the credits count toward a criminal justice degree.

Wright says there are some perks. You get a take-home car, the office provides you with a phone, and there is a family setting.

“I’d like to pay these guys more money. And county council is certainly talking about that,” Wright said, “but working in law enforcement has it’s own rewards.”

So far, Grace says a only a few students have applied for the class. They need seven to make the class happen. So, if you’re interested, apply now. You have to be, at least, 20 years old.

Wright says you can also apply to the sheriff’s office now. And you can intern with a deputy first to see what it’s like.