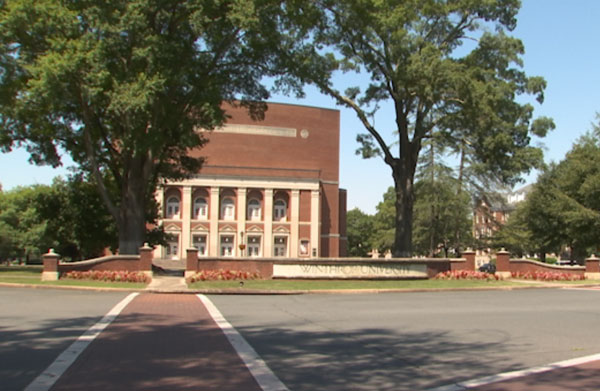 Sydney Broadus and Ta-Taya Campbell are both Spartanburg natives. They just graduated from Winthrop University with their four-year degrees at only 19 and 20 years old.
Article by: Melanie Palmer | WSPA

Sydney Broadus and Ta-Taya Campbell are both Spartanburg natives. They just graduated from Winthrop University with their four-year degrees. An accomplishment that leaders with the school told 7 News, is extra special when you’re only 19 and 20 years old.

Sydney Broadus and Ta-Taya Campbell have a lot of adoration for Winthrop University.

“It felt very homey to me compared to any other college I visited,” said Ta-Taya Campbell who graduated Winthrop University at 20 years old.

These two have the same home town and the same alma mater. They also have something else in common, they’re some of the youngest four-year graduates of Winthrop University.

“A lot of people graduate a semester early but to graduate two, or three or even four semesters early, that would be unusual. It’s a great accomplishment,” Gina White told us who is the Director of Archives and Special Collections at Winthrop University.

Ta-Taya Campbell and Sydney Broadus both used their high school’s dual enrollment program where they took a mix of high school and college classes.

“I was doing college classes, I was on a college campus since my freshman year so I was 14 then,” Campbell told 7 News.

Parents of both graduates told us they’re proud but not surprised of their daughter’s accomplishments.

“She has always been motived to keep learning and trying,” Sydney’s parents said.

“She always wanted to go ahead and get it done, pursue a lot of things,” said Ta-Taya’s parents.

It was that drive that earned both of them four-year degrees at only 19 and 20 years old.

For Ta-Taya, there was an especially hard challenge during the time they pursued a degree.

“After my sister passed, it was definitely an adjustment cause like a lot of people don’t understand, when you lose someone that close to you, it hurts,” Campbell said.

Ta-Taya is already working in the field they love.

“I work as an ABA therapist right now, we work with autistic children to young adults,” said Campbell.

Same goes for Sydney. However she said, her young age has been a roadblock at times.

“I know I was turned down from an internship because of my age, they didn’t believe I was a senior,” Broadus told us.

However, both students credit their success and accomplishments to the strong support systems that got them this far.

Campbell majored in psychology and minored in sociology.

Broadus earned a mass communication degree in broadcasting and a minor in marketing.