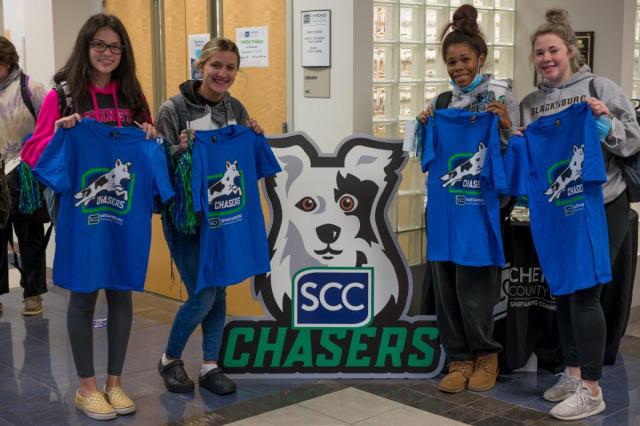 SCC experienced a record high enrollment as the national data shows a downward trend. SCC's Free Tuition initiative made quite an impact. Students shown with the SCC mascot, the CHASERS. Photo by Deb Stevens, SCC.
Article by: Sara Weissman | Inside Higher Ed

Enrollment swelled at Spartanburg Community College this fall as students took advantage of a free tuition initiative. It was a stark contrast to ongoing enrollment declines at community colleges across the country.

Rebecca Hui Zhang lost her job of six years at a travel agency in Greenville, S.C., last year as the pandemic wreaked havoc on the tourism industry. She wanted to go to college so she could shift to a more stable career but worried it would be an impossible financial burden. With two children to care for and other financial obligations, she did not want to go into debt.

Then she started seeing and hearing the same message everywhere—at the adult education center where she took classes and even on signs along the interstate highway—that Spartanburg Community College was offering a year of free tuition to South Carolina residents. She enrolled this fall as a first-time college student at age 34.
“Without this free tuition opportunity, I wouldn’t even be here,” she said. “I would never even think about going back to school.”

Zhang wasn’t the only one to take the college up on its offer—so many people enrolled that the college hit its highest student head count ever this fall, 6,097 students, which was about a 47 percent increase compared to fall 2020 and a 32 percent increase in enrollment from before the pandemic. It was a stark turnaround for a college that lost about 500 students last year.

“We set up messaging throughout our communities and really did a good job of highlighting what we were able to offer,” Mikota said.
The college is providing free tuition this academic year to anyone who lives or works full-time in South Carolina who is taking classes that amount to at least six credits. Students must complete the Free Application for Federal Student Aid and exhaust all other available scholarships and grants, and the college will cover the rest using COVID-19 relief funds.

The effort will also receive a financial boost starting next semester with an additional $17 million from the Governor’s Emergency Education Relief ​Fund for a new workforce scholarship program at the state’s community and technical colleges. The funding is expected to cover 15,000 tuition scholarships at institutions across the state starting in January to support students pursuing associate degrees or credentials in fields such as computer science, manufacturing, health care and construction.

Spartanburg’s enrollment boom is a very different story than that of most community colleges across the country. Undergraduate enrollment at two-year institutions fell 6 percent on average nationally this fall compared to last fall, according to National Student Clearinghouse Research Center data. Enrollment dropped a total of 14.8 percent compared to prior to the pandemic.
Some community colleges have cut their budgets and laid off staff and faculty members as a result of lost revenues. U.S. Department of Education data show that the number of full-time instructors at public two-year colleges decreased by 6.1 percent, from 97,571 in fall 2019 to 91,660 in fall 2020, Glenn Colby, senior research officer at the American Association of University Professors, noted in an email. Among public four-year universities, the number fell just 0.2 percent, from 326,651 in fall 2019 to 326,001 in fall 2020.
Spartanburg, meanwhile, is hiring more faculty members to accommodate the enrollment surge. The college hired 57 adjunct instructors this fall and plans to hire 19 more, plus six full-time professors, this spring. College leaders anticipate a need for more faculty members ahead of fall 2022 if enrollment holds steady.
The enrollment growth has also meant increased operational costs for programs that now require more equipment and materials. For example, the costs of the welding program are expected to double from $50,000 in fall 2019 to $100,000 this academic year. But Mikota said the initiative is worth the expense.
“We’re not looking at the profitability of it,” he added. “We’re looking to make sure we meet our mission at a higher level.”
John Fink, a senior research associate at the Community College Research Center at Columbia University’s Teachers College, said Spartanburg is in an enviable and unique position.

Spartanburg is “definitely an outlier,” he said. “It’s an exciting outlier. The vast majority of community colleges are really declining in enrollment. It’s really hard times. Folks are really trying to support and build back their communities with limited resources.”

Fink noted that enrollment decreases were most pronounced among the kinds of students now flocking to Spartanburg, including older adults and students of color. These students disproportionately lost jobs and experienced financial hardship, struggled with the challenges of online learning, and juggled paid work and childcare during the pandemic.

Morley Winograd, president and CEO of the Campaign for Free College Tuition, said free tuition initiatives usually result in large enrollment upticks like Spartanburg’s. He pointed to a study published in 2019, which found that colleges with free tuition programs, on average, had an enrollment increase of 22 percent among first-time, full-time students since the programs were implemented, compared to nearby colleges without them.
The “most dramatic” enrollment gains generally happen the first year a free tuition program is introduced, and then the growth rate slows over time, he added.

Other community college leaders and state lawmakers throughout the country responded to the pandemic with short- and long-term free tuition programs. For example, the Community College of Vermont is offering multiple free tuition opportunities to students this fall, including programs targeted at low-income students and students in specific fields of study. The college gained 546 students from fall 2020 to fall 2021.
“There have been plenty of demonstrations of the underlying demand for more adult education, more postsecondary education, if the barrier of tuition is removed,” Winograd said.

This was precisely the case for Zhang, the Spartanburg student, who is now studying computer networking and cybersecurity. She said not having to pay tuition freed her to “think about things other than money.” She plans to eventually transfer to a university, get a bachelor’s degree and find a job that she has “passion about, not just some kind of general entry-level job like I’ve been doing before.” She wants her children to look up to her and see her as a role model.

“It’s like I have a key to open the door” to a “broader future,” she said. “My life is not just narrowed down into limited options.”
Winograd believes now is the opportune moment for colleges to establish free tuition programs as the economy recovers from the pandemic and while states are still flush with federal COVID-19 relief money. The students now enrolling are also likely considering their future job prospects and eager to get education or training that can help them get better-paying jobs.

The enrollment numbers at Spartanburg are “not surprising, but they’re very positive and they’re very reinforcing of the idea that any community college which is bewailing its reduction in enrollment has a very simple solution at hand,” Winograd said. “All they have to do is bite the bullet and make the tuition free and find the funds elsewhere instead of from the students and their families.”

For his part, Mikota is already thinking about how to keep the new students enrolled; he expects to enroll more this spring and next fall. The college partnered with Spartanburg Academic Movement, an organization focused on improving student outcomes in the county, and OneSpartanburg Inc., the local chamber of commerce, to raise awareness about the free tuition opportunity and bolster new efforts to retain students. The partner organizations funded a new office of student success at the college this year, which houses the college’s student advising services and a new dean of student success to assess “bottlenecks” and challenges that hinder students from graduating and transferring to a four-year college.

Mikota noted that about 90 percent of students either get a job in their field of study or transfer to a university when they complete their studies at Spartanburg, which translates to more people getting higher-paying jobs and a more educated and better skilled local workforce.
“It wasn’t just about bringing them back for free tuition,” Mikota said. “It was about retaining them and making sure they succeed.”