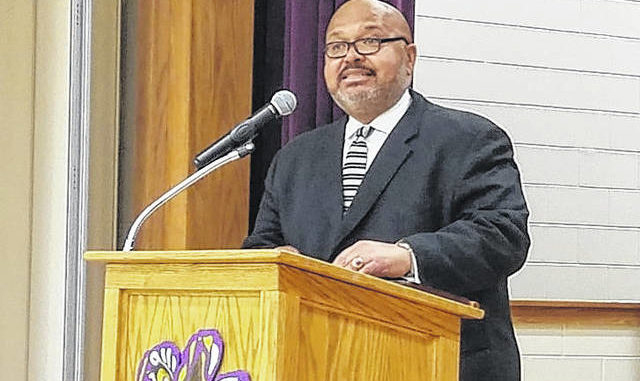 Who are we? What is victory? How do we get there?

Those were the questions posed by Isaac McKissick, Director of the Spartanburg Community College Union County Campus, as he delivered the keynote address during the Union County Branch of the National Association for the Advancement of Colored People’s (NAACP) Martin Luther King, Jr. Day Celebration held this past Monday at Sims Middle School.

The celebration, like those in previous years, celebrates the life and legacy of the Rev. Dr. Martin Luther King, Jr., the foremost leader of the Civil Rights Revolution of 1950s and 1960s. The theme of Monday’s celebration was “Marching Onto Victory,” a title that calls to mind the Civil Rights marches of that era, many of them lead by King, that had as their goal the flowering of freedom for all regardless of race or any other differences among human beings. The theme of this year’s King Day celebration implies that these marches are still needed and still continuing in the ongoing struggle of liberty and justice for all.

In his remarks, McKissick cited the theme of Marching Onto Victory and said “I would like to call it a journey through faith that begins with focus, introspection, and unity.”

McKissick said that in order to successfully complete this march the following questions had to be asked:

“Successful marches require a team effort — teams often start as strangers who have a shared vision and mission,” McKissick said. “Above all, teams function better when we take the time to know and learn our teammates.”

To get that “Team Building Process started,” McKissick asked all those in attendance “to stand up, go across the room, introduce yourself to a stranger and give them a hug. This will make our journey a little bit easier to undertake.”

All those present then rose from their seats and circulated throughout the room, introducing themselves to each other with smiles and then giving one another hugs before returning to their seats.

'Now I would like to share something with you about each and every person in this room,” McKissick said. “I’m an old soldier and we call the extra time spent on getting things right — God and Country. This evening is something we can label God and Country Time.”

McKissick then quoted from Genesis 1:27 and 1:31 in The Bible to tell those present “what God says about the person you just met.”

31 God saw all that he had made, and it was very good.

”Simply stated, we are all created in God’s own image and God stated that all of us are very good,” McKissick said.

As for the Country part of God and Country Time, McKissick quoted from The Declaration of Independence.

We hold these Truths to be self-evident, that all Men are created equal, that they are endowed by their Creator with certain unalienable Rights, that among these are Life, Liberty, and the Pursuit of Happiness….

“To sum it up, each of you, and the people you just met, are all created in God’s own image that God stated is very good and this great country is built upon equality, and each of us is endowed by God with the inalienable rights of Life, Liberty and the Pursuit of Happiness,” McKissick said.

McKissick said that in order to achieve victory “we must create an environment that provides our children and families the skills that make them capable of successfully transitioning from being a stranger in a strange land to one able to provide the comforts of home to the least.”

For the adult, McKissick said this means “an opportunity to make a living that allows me to take care of my family.”

In the case of the child, McKissick said it means “a good education in a safe, caring environment that allows them to go forth and make a way for themselves in a challenging world.“

McKissick said that victory is won through:
1. Understanding that everyone didn’t grow up the way you did.
2. Knowing the the best indicator of how much you care for a person is how you treat them
3. Providing opportunities for others that we would want for ourselves, our families and our friends

That first obstacle in turn leads to what McKissick said is “the great obstacle to this march“which he said “is understanding that everyone didn’t grow up the way you did. We tend to view others through the prism of our own lives.” He then proceeded to give an example from his own life.

“I recently attended Carolyn Rutherford’s retirement celebration,” McKissick said. “One of the guests told me that I didn’t know that you grew up down there. Down there being Horseshoe Circle. Carolyn and I met down there when the hood had rats instead of people being referred to as Hood Rats. It’s difficult moving forward when you’re automatically viewed as being inferior due to where you’re from and how you grew up.”

McKissick added that “fortunately, the person who made this statement and I have always had a great relationship.”

As a southerner of his generation, McKissick was born into a society segregated based on race with African-Americans treated as inferior to European-Americans both in law and in custom. Even so, however, McKissick pointed out that there were those on the empowered side of that divide who recognized that those on the dis-empowered side of that divide were also made in the image of God and endowed by Him with unalienable rights. It was that realization that lead them to reach across that racially discriminatory boundary to treat a black youth as their equal in the eyes of God and help him pursue his dreams and realize his potential.

“This brings me to the understanding that all relationships are based not only upon the acceptance of us being created both in God’s image and equal, but more so upon how we choose to treat one another,” McKissick said. “This is also the best indicator of how much we actually care for one another.”

McKissick is a graduate of the United States Military Academy at West Point and a veteran of the US Army and he told a story from his childhood about his path to the Academy and to serving his country as a soldier.

”In 1974, as I began my journey to West Point, I was invited to lunch at LTC Jim Gillespie’s mother’s home right up the street from the Carnegie Library,” McKissick said. “Word got out that ‘they treated him just like white folks.’”

What did that mean, both then and now?

“At that particular time, as a child, it meant being welcomed into a strange environment through the front door, having a seat at the table, enjoying a meal, afterwards discussing my future and potential, and being welcomed as a member of the family,” McKissick said. “As an adult, it takes on a similar, yet broader meaning: each and everyone of us wants to be welcomed into a community through the front door, have a seat at the table, enjoy a meal and be accepted, not just as athlete/worker/charity case, but as one who has the potential, when recognized and nurtured, to become an individual who can contribute to the growth of not only this community, but also this great nation.”