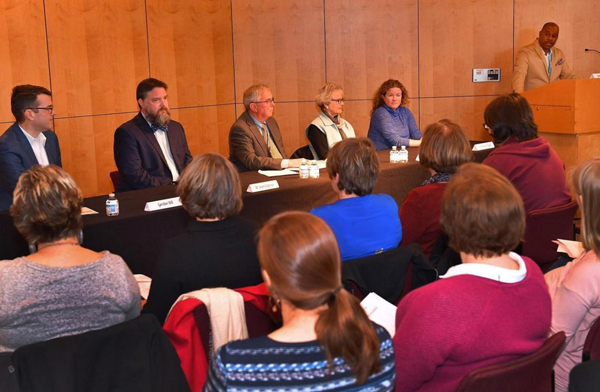 Social media is playing a bigger role in politics today -- with politicians using the media to take their views directly to voters, election experts at Spartanburg Community College said Thursday.

“Unlike television news, you can immediately respond to what’s being said -- put your own two cents in,” SCC political science professor Allison Ellis said of social media. “Since it’s behind a screen, that allows people to feel like they can say some things maybe they wouldn’t say in people’s faces.”

Ellis was one of five panelists who held a Lyceum Lecture discussion called “Elections 101: What to Know Before You Vote.”

The moderator was Anthony Mims, political science instructor at SCC

She said many people still watch television news, but with social media voters can participate in live discussions or voice their opinions.

Elected officials too have discovered that they can deliver their message directly to voters without having to go through traditional media, she said.

President Trump, she said, is a prime example with his frequent use of Twitter.

“With a newspaper or television, you’re having kind of this middle man to deliver the message in a different way,” Ellis said. “Whereas with social media, Trump or any politician can go on it and say what they want to say, without having that filter through another source.”

Dill said many viewers who formerly got their information from traditional television news are turning to cable news channels that align with their own beliefs.

“People seek out news to confirm what they already want to believe,” Dill said. “That’s true of all of us. That’s a human condition. It’s confirmation bias. We all have it.”

“On a national level, objective information -- the kind of news we are trained to try and give people -- is very difficult to deliver to people because, frankly, they don’t want to hear it,” he said. “And we get a lot of feedback from people. If we give you news you didn’t want to hear, people will accuse us of lying. It makes them angry. And they change the channel.”

“Frankly on local news we want you to watch the entire eight-and-a-half-hour broadcast. It becomes a sort of perverse bias for those delivering the news. Don’t agitate your viewers and tell them things they don’t want to hear.

“The greater challenge is viewers and voters have to overcome their own biases and frankly, I don’t have a good solution how to do that.”